Volvo Trucks’ “The Epic Split” ad featuring Jean Claude Van Damme, must offer a lesson in the new social media marketing paradigm, garnering more than 7.5 million views on Youtube within 24 hours of its launch on Thursday. Seven million, five hundred and eighty thousand, five hundred and seventy-nine by 10 a.m Friday to be exact (7,580,579). 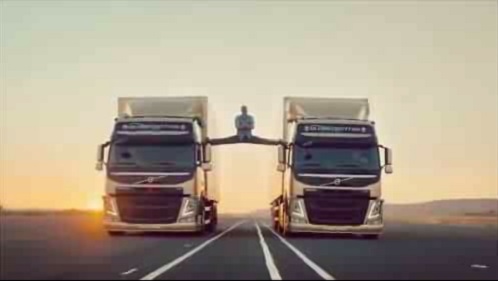 But was it a victory for the Volvo FM truck and its technology or for Van Damme?

“It’s … the first time we’ll ever see anything like it – in a movie or a commercial,” said the Belgian superstar on set at a deserted airfield in Spain, before the shoot.

It certainly was a hit on Friday morning TV with oohs and ahs from media anchors. But most were marveling at Van Damme’s agility “at 53 year-old” –just as CTV Canada AM’s Ben Mulroney and partners.

The comments by some Youtube viewers were just as telling. “That’s something you don’t see everyday. Pretty amazing to see the physical condition Van Damme is in,” said Chad Morrow via Google+

“I am not in any way a fan of Jean Claude Van Damme but this commercial he did for Volvo is incredible,” said Nancy Atkinson, also via Google+.

“I love it. JCVD is in great shape and I know he did it for real but I must say who ever was driving them trucks did an amazing job they ain’t swerve or go to fast or anything…,” said someone going by the handle Heaven Sent, who at least acknowledged the skills of the drivers.

The real verdict will be in when Volvo releases sales figures for the truck, following a feat which the company’s marketing material says “aims to demonstrate the unique stability of Volvo Dynamic Steering.”