I have a gridiron dream. Well, actually it is more like a daydream – a fantasy.

Here’s how that dream unfolds:  Streamers – black, green and gold – flutter in the warm breath of the February breeze above the human tidal wave that flood down the streets towards the national stadium. The multitude is jubilantly singing the praise of their world-beating gladiators. “Buffalosoldier,” a rumbling voice bellows.  A split second later the thunderous response from the crowd rips the air apart. It was as if a single mighty voice shouted, “In the heart of America!”

The ‘Buffalo Soldiers’ have journeyed to the heart of America and wrested the most coveted of sporting titles from the hands of ‘The Titans’. Jamaicais the winner of Super Bowl 56. This is the year 2022. 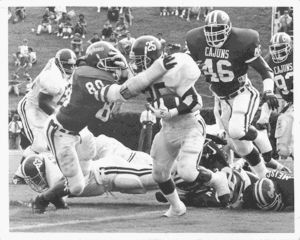 The question on the minds of everyone is this: How did this team from a small island country of 2.75 million inhabitants, where there were no instances of the game being played as an organized sporting event a mere ten years ago, accomplish this Herculean task?  Well, it all began in the year of 2012.

In February of that year the Giants had defeated the Patriots to claim the 46th Super Bowl title.  Among the ranks of the competing gladiators were two who were of Jamaican heritage. These were the gladiators Patrick Chung of the New England Patriots and Kevin Boothe of the New York Giants. Jamaica, quite portentously, was in a win-win situation as the gridiron drama unfolded at Lucas Oil Stadium. It was a truly envious position to be in and this was a harbinger of the way things would develop in the decade which followed.

The death of Junior Seau, former San Diego Chargers linebacker, in an apparent suicide in May of 2012, sent a shockwave through the institution of American football. Seau had taken his life in a similar fashion (a bullet to the chest) as did former Chicago Bears great Dave Duerson, who left a suicide note behind indicating his desire to have his brain studied for chronic traumatic encephalopathy (CTE). CTE is a trauma-induced brain disease common to football players, boxers, soccer players and others who routinely receive blows to the head in the course of engaging in said sporting activities.

Seau’s death amplified that of Duerson and sent a shudder of fear throughoutAmerica, frightening parents into weighing the consequences against the benefits of permitting their young charges to participate in the sport, thereby threatening to diminish the future pool NFL talent.

But as terrific a blow as parental fear presented to the future of American football, a bigger and more immediate blow was to come when a group of NFL players, some 2,200 strong, filed suit against their employers claiming that they were not warned about the consequences of suffering repeated blows to the head. As America struggled with the consequences of traumatic head injuries and as mothers shielded their baby boys from the prospect of football-induced tragedy, a world of opportunity opened up for  brave would-be gladiators from across the world.

Jamaica, with its tradition of speed and indomitable spirit, and its proximity to theUSmainland, was in a particularly favorable position to avail itself of this new world of opportunity.

Though some Jamaicans were proud of this tenuous link, there was nary a whispered claim that these gladiators, who were rumbling in the arena of an “all-American sport,” were bearers of the banner of Jamaican sporting dominance.

The sense of pride which Jamaicans exhibited in 2012, regarding sports, derived almost exclusively from the performance of the sprint athletes on the world stage. Moreover, at that historical juncture, sprint and football were meridians apart, in the popular imagination, the one being the virtue of Flash and the other being the vice of the Hulk. There is, though, a longstanding history of sprinters playing the brutal sport.

This history begins with Olympian and medalist Ollie Matson who was drafted by the Chicago Cardinals and it continued with Hall of Famer Bob ‘Bullet’ Hayes who won gold in the 100-m and 4×100 events and played for the Dallas Cowboys.  Then there was bob Gault, a member of the 1980 USA Olympics team, who was drafted by the Bears. There was, also, James Jett who received a gold medal for his role in the 4x100USArelay team of 1992 and was later recruited by the Raiders. And the list goes on.

There are many who performed at the highest level in Track and Field who sought careers and excelled in American Football. In a word, there is a long history of connection between the athletes who performed in the respective sport, even if there is no demonstrable history of co-operation between the distinctive sporting institutions on a world-scale.

The world longed for such co-operation or at least for some degree of cross-pollination if the wishful thinking expressed by football fans, who were desirous of seeing Usain Bolt as a gridiron competitor, was anything to go by. Bolt expertly suppressed those fantastic notions, declaring that football experts had declared him unsuited for a gridiron career by virtue of his slender build and in the same voice offered alternative scenarios for a cross-over into other careers, notably in soccer or basketball.

But if Bolt could not be moved by his adoring fans to don the uniform of the gridiron warrior, it did not prevent the enterprising mind of Ato Boldon from apprehending the enormity and the potential of the connection both in terms of the technical impact on the performance of the gridironist as well as the potential yield as a lucrative business venture. By 2010 Boldon had launched such a business venture and by 2012 was becoming a name to reckon with in terms of turning out Combine-ready NFL prospects with Olympian-grade sprinting techniques as part of their field arsenal.

And the program has managed to gain superlative results from this effort, as proof of which they have produced NFL gladiators of the caliber of J. J. Birden ( Chiefs, Falcons), Ronnie Harris ( Patriots, Seahawks, and Falcons), Patrick Johnson (Ravens, Redskins, Jaguars), Sammie Parker (Chiefs, Raiders), and Jordon Kent ( Seahawks, Rams).

The Oregon football program demonstrated that track speedsters could be successfully converted into effective gridiron gladiators and in a round-about way, established the scientific blueprint for Jamaica to use its preeminence in the sprint events as the launch pad from which to implement a systematic training program for home-grown gridiron warriors.

Swept along by the frenzy generated by the performance of the Jamaican contingent at the 30th Olympiad staged in London in 2012, parties in both the private and public sectors began to take a closer look at the many ways in which the prowess of the Jamaican athletes could be transformed into tangible social and economic returns.

They contemplated the ways in which the spotlight which the Olympiad focused on the island as a sporting powerhouse could be levered to expand the development of sporting events and the broadening of market share on the global plane.

A partnership evolved between corporate entities and government on the one hand and the track clubs and American football interest on the other, in consequence of which training programs were implemented in far-flung reaches of the island.

Playing facilities mushroomed all over the island. Eight mini-stadiums were constructed on acreage purchased from the sugar estates. Numerous sporting goods stores sprang up offering football apparel, uniforms and memorabilia and marching band and cheerleading squads were formed on high school and college campuses island-wide.

By 2014 there was a nationwide inter-school competition in full swing with schools vying for the prestigious Bigby trophy (named for Trelawny-born American footballer Atari Bigby). The year 2016 saw a broadening of the competition with the establishment of the regional competition in which schools competed for the CARICOM Trophy.

Ever ambitious, the Jamaican sporting authorities successfully lobbied theUSAto have its gridironists participate in the inter-state football competition. That year they shocked the Americans by coming away with top honors.

The year 2020 saw the Jamaicans competing in the intercollegiate competition. Their performance was commendable that year. In 2021, however, they snatched the collegiate title. That same year the Caribbean region won a bid to become integrated in the NFL and the world experienced the might of the ‘Buffalo Soldiers’ as they took the field for the first time against their American counterparts.  And here we are in 2022 and the ‘Buffalo Soldiers’ are the masters of the gridiron sport.

I’ll be the first to admit that the above represents a crazy dream but all great achievements begin as a mind-blowing fantasy. Moreover, the merest contemplation of the statistical picture gives a clear indication that dreams of this nature are obligatory. When one considers that, on an annual basis, more than 2,500 athletes attend ISSA Boys and Girls Championship, it becomes clear that an abundance of talent exists in Jamaica.

When one places that figure against the backdrop of less than a hundred world class competitors, a picture of dire waste of the existing talent takes shape.  At that rate, less tan four percent of the athletes who perform at the Champs level find outlet for their skills in the international arena  and, by that virtue, are availed the prospect of plying their trade for commercial gain.

The picture becomes even more dire when one realizes that of the 100 or so world class athletes that emerge on an annual basis, only about 15 have international standing that is significant enough to make them earners on the athletics circuit. In percentage terms, this presents a stark and daunting picture. Of the 2,500 athletes who perform at Champs on an annual basis only 0.6 per cent possess winners’ credentials that equip them to be contenders in the world marketplace. There is probably no stronger argument than this that one could make, for equipping the Jamaican male sprint artist with the skills of a gridironist.

I’ll dream on in the hope that, imbued by the spirit of the man who gave the world the song titled Buffalo Soldier, the wonderful, fun-loving and forward-thinking people of Jamaica grab this dream and turn it into another facet of their reality.

Derrick Lassic is a retired NFL player and a Rockland County Sports Hall of Fame inductee. Send feedback to dlassic1[at]gmail[dot]com

Drive on to Exonerate Marcus Garvey