I must be crazy. Like the gods drinking Coca Cola and dropping the bottle in the Kalahari Desert on Bushmen. Read this and tell me what you think (I’m going to tell you what I think, right after the commercial break):

(Jamaica”s) Tourism Minister, the Hon. Edmund Bartlett is expressing shock and disappointment at the decision by the Government of the United Kingdom to increase the Air Passenger Duty (APD) and maintain higher rates to the Caribbean than those charged to several other rival destinations. The British Government in its announcement today revealed that the APD would be increased by some 10 % in April 2012 and that the current structure would be maintained. Minister Bartlett said “this announcement is as unbelievable as it is unacceptable. The decision by the UK Government to maintain the current regime despite strong lobby efforts by the Caribbean Tourism Organization (CTO), Ministers of Tourism across the region and the Caribbean Diaspora in the UK is very disturbing.”

Minister Bartlett added that “we support the position of CTO that this decision is a slap in the face for all Caribbean people. We are saddened that the Caribbean’s proposal that the band arrangement be adjusted to establish only two bands for long and short haul respectively, in addition to a rate adjustment was not embraced. We believe that approach would have ensured greater equity. So we are very surprised that after engendering support at the parliamentary level in the UK and despite the fact that many agree that the current regime is discriminatory, there was no change.” He noted that “notwithstanding our efforts the current tax burden placed on British travellers to the Caribbean will continue to have an adverse effect on the region’s tourism earnings.”

The Minister continued that “we in Jamaica and the wider Caribbean are very disappointed that despite our efforts and those of other Commonwealth countries the British Government has ignored what we have said. Given the fact that the Caribbean is the most tourism dependent region I am concerned that they have also ignored the impact the current APD regime will have on the income, social stability and economic viability of our region.”

He cautioned that “in today’s interdependent world countries must ensure that actions that are aimed at safeguarding their own fiscal positions do not destroy that of other global partners. If our legislation engenders poverty in other places we are actually encouraging the migration of crime and other social ills through our insensitive fiscal policies.”

Minister Bartlett said “in spite of our intensive lobby efforts not only has the UK Government refused to adjust the banding system but they have increased the rate. Hence they have rejected every recommendation the Caribbean and other partners have put forward thus making a mockery of their call for consultation.” 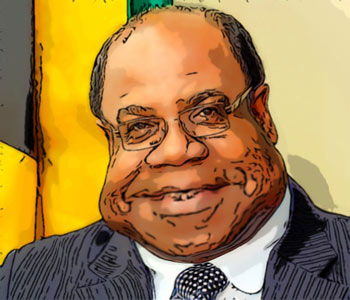 After that commercial break, I’m wondering whether the honourable minister is serious because it goes not just to his credibility but that of his colleagues  who share similar views: that the government elected by the people of Great Britain is acting on the whims – or even needs – of people in the ex-colonies.

Abeng News has ignored this ‘issue’ while it has dragged on, hoping that some magical solution would arise, much as the CTO ministers apparently hoped. Seeing this release from Minister Bartlett, who I’m told is endearingly called ‘Cheeks’, sounds as though he were writing it with a smile. It’s election season in his country and the bell is the symbol of his Jamaica Labour Party (JLP) but the ding dong we’re hearing is not part of the campaign for the December 29 general election to seek endorsement for young Andrew Holness who inherited Bruce Golding’s mess in November.

No. This part of the universal Jamaican and Caribbean mess. For example, Jamaica, the country which has stagnated economically for 40 years, has one of the highest departure taxes in the region at the same time as the current administration promotes a labour policy of preparing people for export to seek jobs not being created at home.  Indeed in a globalized economy, one casts ones net where there is fish but the utterances of the tourism minister, like the actions of his labour counterpart, Pearnell Chalrles and his teams to Canada and the USA farms, reeks of exporting governmental responsibility to climes which are growing increasingly colder.

The tourism industry upon which the Caribbean now almost solely depends, got its kick start when the Boston fruit company in the late 1800s, discovered a banana industry and then tagged on the vacation traveler to Jamaica. No intellectual input from the host countries.

A century later, when the successors of the same banana companies, having abandoned Caribbean fruit, pressures the European ex-colonizers to do the same, the region paid – and continues to pay – zillions to lobbyists to flog dead banana and sugar horses. And as the old mother country of the Anglophone Caribbean comes under economic agony and money grabs from its own electorate and departing passengers, the abandoned children want to use moral suasion to cling to the falling (dwindling) crumbs.

Now the bearers of tourism gifts threaten the Caribbean industry and this is the reaction.

We know it can be difficult  creating change and progress in so-called Third World countries where Western democracy ideals and transparency in governance are at a premium for their scarcity: the dreadlock and the turban wearing masses who are not accepted for their way of grooming and dress in their local disciplined forces, exact democracy and inclusion in the military, police and fire service of their Western hosts; so whether as individuals or government we’re in good company.

Transparency International just gave Jamaica a resounding 3.3 out of 10 in its 2011 Global Corruption Perception Index (CPI) Rankings, which were released last week, with a country ranking of 86 out of 182 countries. In 2010, the country’s CPI score was also 3.3, while it was ranked 87 out of 178 countries.

If the Jamaica government would listen to its people and answer calls for probes into the national leadership’s involvement in drug and murders – such as the matter of the present lot’s involvement with Mr Dudus Coke and the killings resulting from its refusal to allow him to be tried for crimes in the USA; and the aspiring people’s National Party’s Trafigura money swindle then Minister Bartlett would have solid moral grounds to chastise the Brits.

Two days after the May 2010 military incursion into the West Kingston enclave of Tivoli Gardens to apprehend Coke, with more than 80 people killed, government and private tourism interests in Jamaica were declaring to the world “everything cris'” (Jamaican for ‘all hunky-dory’). But over a year later, no politician has been held accountable for the debacle and deaths and the socio economic system that led to the rise of Coke and his ilk remains entrenched.

When I hear platitudes like: “If our legislation engenders poverty in other places we are actually encouraging the migration of crime and other social ills through our insensitive fiscal policies,” I jump as I exclaim, “HARK! Is that the sound of a canon I hear?”

Debt Before Dishonour – St Kitts Defaults as it Restructures