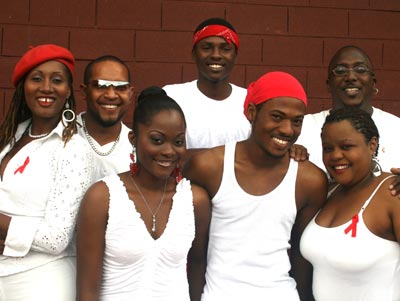 Three years after its highly anticipated and well-received World Premiere in 2005, a Jamaican school tour the year after and a tour of St. Vincent and Grenadines in June 2008, the HIV awareness edutainment musical POSITIVE returns to the stage in Jamaica from November 29 to December 7 as part of the acknowledgement of World AIDS Day and Week.

Scripted by veteran playwright Trevor Rhone, lyrics by fabian thomas and Teisha Duncan and music by Grub Cooper, POSITIVE  follows the efforts of an HIV/AIDS educator and his attempts to spread the word about HIV/AIDS prevention, safer sex and abstinence by doing ‘walk & talks’ in public places.

The storyline also examines the challenges and realities of other characters who find themselves dealing with the psycho-social, sexual and economic issues related to HIV/AIDS. They meet Joe on the street and their stories are explored through dialogue, song and movement, while utilizing a mixture of present day action and flashbacks. Ever-present and plotting to undo Joe’s efforts is Hi5 (HIV). Hi5 is committed to making sure the rate of HIV infection increases and that the factors that drive the epidemic continue to do so.

This remount of POSITIVE will include a special fundraising gala performance for the National AIDS Committee on November 29, special performances for schools from December 1 – 5 at 2:30 p.m. each day and four performances open to the general public on November 30 and December 5, 6 and 7.

POSITIVE was originally funded by World Bank, Ministry of Health, Public Affairs Office of the US Embassy and produced by the Jamaica Association of Dramatic Artists (JADA).

An Attempt at the Jamaican Patty