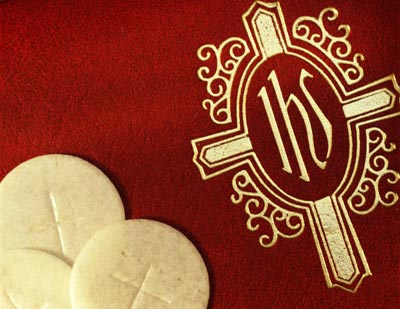 Some bewildered parishioners of the St. Mary’s Catholic Church in Greenville, South Carolina, had to forego the Sacrament of Holy Communion, after their priest decreed that if they voted for Barack Obama then their vote “constitutes material cooperation with intrinsic evil.”

The Rev. Jay Scott Newman stated in a letter to his congregation the Sunday after Obama’s victory that they would be in danger of eternal damnation if they receive the sacrament before they do penance for voting for the pro-choice candidate.

“Our nation has chosen for its chief executive the most radical pro-abortion politician ever to serve in the United States Senate or to run for president,” read the text of Newman’s letter, where he makes reference to the candidate as Barack Hussein Obama, full name for emphasis.

“Voting for a pro-abortion politician when a plausible pro-life alternative exists constitutes material cooperation with intrinsic evil, and those Catholics who do so place themselves outside of the full communion of Christ’s Church and under the judgment of divine law. Persons in this condition should not receive Holy Communion until and unless they are reconciled to God in the Sacrament of Penance, lest they eat and drink their own condemnation.”

The blogosphere bristled at the news, and St. Mary’s was besieged with calls and emails, as the public lost no time in issuing its vitriolic and vituperative expressions of outrage, and calls for the priest to take his Mylanta and some other more serious medications. Bloggers called for the parish to lose its tax-exempt status since it had now joined the ranks of political organizations, and in chat rooms insults and accusations were hurled at those who defended the statements of the St. Mary’s priest.

The public was justifiably rankled.

But before the tax-exempt challenge became a major issue, church authorities swiftly intervened to steady the boat Newman rocked, and the head of the South Carolina Diocese Msgr. Martin T. Laughlin semi-sternly rapped the wayward knuckles of the priest, while graciously upholding the pro-life tenet as one of the strongest catechisms of the Roman Church.

“As administrator of the Diocese of Charleston, let me state with clarity that Father Newman’s statements do not adequately reflect the Catholic Church’s teachings,” the Monsignor said in a posting on the church’s website. “Any comments or statements to the contrary are repudiated.”

Okay, Monsignor. But what’s “adequate”? Do the statements reflect “some”? And how much?

It is intriguing that during the 2008 presidential campaign many Catholic priests were comfortable with their parishioners rooting for pro-choice Democratic nominee candidate Hillary Clinton during the primaries, until Obama took center stage and the game rules suddenly changed.

And then there is this curious approach to politics and abortion taken by the Mother Church in the very heart of Rome.

In Catholic Italy, abortion, legal since 1978 is not an issue. According to the Catholic News Service, when over a thousand of Italy’s most politically active Catholics met in early October, the message sent by Pope John Paul II urged greater church influence on such issues as the family, the media, economic justice and globalization.

Amazingly, and perhaps reflecting the political priorities of the Catholic Church in Italy, the pontiff did not mention abortion! As a matter of fact, throughout the four days of unending speeches and brainstorming sessions the focus was on other issues and the subject was hardly discussed.

“In Catholic Italy, abortion, legal since 1978 is not an issue.” This is symptomatic,” Carlo Casini, president of Italy’s Pro-Life Movement, said in an October interview. “A fairly high percentage of Italian Catholics are not willing to push strongly on abortion because they consider it secondary. It’s an issue that divides Catholics politically, so the feeling is that it’s better not to talk about it,” he said.

It is surprising that the abortion issue has sparked political debate in the United States where there is far more religious diversity, when it has gained no traction in a country that is nominally 97 percent Catholic. The Catholic News Service went on to point out that “the pope, whose own Diocese of Rome has the highest abortion rate in the country, has strongly and consistently preached a pro-life message to Italians, but that has not been translated into political activism among leading Catholics.”

This, at a time when abortion has become a priority issue for many Catholics in the U.S. election campaign, and voters for a pro-choice candidate have been all but consigned to purgatory by a priest consumed by more than religious zeal. We have seen some unexplained phenomena during the US elections of the recent past, but this one remains the most enigmatic of them all. And we haven’t even mentioned the words hypocrite or theatrics once.

How dare you, Rev. Newman?

Do Women Need Freedom from Religion?