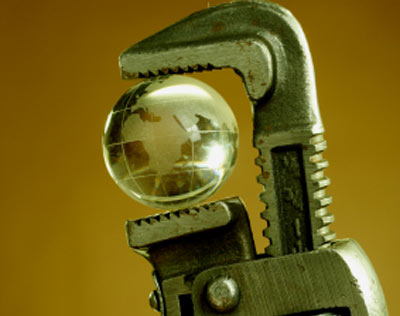 The International Monetary Fund (IMF) and the World Trade Organization (WTO) have issued new reports that show continued bad news for the global economy and project the first decline in output in advanced economies since World War II.

While the IMF’s World Economic Outlook said prospects for global growth have deteriorated over the past month a WTO report confirmed that world trade slipped to 6 per cent growth in 2007.

“Prospects for global growth have deteriorated over the past month, as financial sector deleveraging has continued and producer and consumer confidence have fallen,” said the IMF. “Accordingly, world output is projected to expand by 2.2 percent in 2009, down by some ¾ percentage point of GDP relative to the projections in the October WEO.

“In advanced economies, output is forecast to contract on a full-year basis in 2009, the first such fall in the post-war period. In emerging economies, growth is projected to slow appreciably but still reach 5 percent in 2009.”

The Fund notes that these forecasts are based on current policies and global action to support financial markets and provide further fiscal stimulus and monetary easing can help limit the decline in world growth.

For its part the WTO’s 2007 report, “International Trade Statistics 2008”, says that weakening demand in developed countries, realignments in exchange rates and fluctuations in the prices for commodities, such as oil and gas, introduced uncertainties into the global markets in 2007. As a result, growth in world merchandise trade slipped to 6 per cent in real terms, down from 8.5 per cent in 2006, according to statistics published by the WTO on 5 November.

The 6 per cent trade growth is slightly higher than the preliminary assessment of 5.5 per cent announced in April but still a considerable decline from the 2006 figure.

The slowdown “is due to a deceleration of import demand, mainly in the United States, but also in Europe and Japan,” the report says.

“Trade remained strong in most developing countries. Regions such as Africa, the Middle East, the Commonwealth of Independent States (CIS), developing Asia and South and Central America showed sustained growth in their economies in 2007.

Higher commodity prices induced a 19 per cent rise in the total value of agricultural exports, a higher increase than for trade in manufactured goods, fuels and mining products.

In value terms, for the first time in five years, commercial services trade rose faster than trade in goods at 18 per cent compared with 15 per cent. This was mainly due to the expanding international supply of many financial, computer, and miscellaneous business, professional and technical services and the increase in the price of transportation.

Bangladeshis Among the World’s Happiest