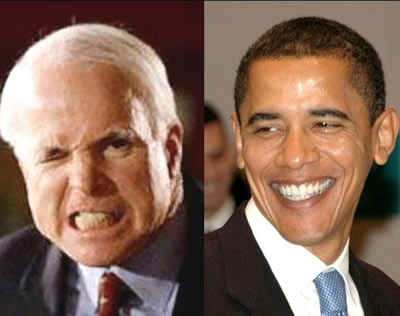 “To the last I grapple with thee; from hell’s heart I stab at thee; for hate’s sake I spit my last breath at thee.”

Perhaps I’m counting my chickens before the fat lady sings on November 4, but Captain Ahab’s haunting last words as he is about to die in his failed quest for revenge are somehow reverberating in the McCain/Palin camp, as its crew scrambles to regain territory lost to the Democrats in the waning moments of a long and exhausting campaign. Yet as the moments wane and the polls indicate percentages and trends, the heat from accusations and recriminations has reached dizzying levels, and the dark side of American politics has been effectively placed under the spotlight of international scrutiny.

Captain Ahab’s hatred for white whale Moby Dick grew into a fatal obsession after the loss of his leg in his first encounter with the mammal. But so relentless was he in exacting revenge, that he transferred this intense hatred into projecting the whale no longer as an animal, but as a malevolent destructive force, demanding the commitment of every available resource at his disposal to hunting and destroying his nemesis: his crew, his ship and his life — a decision that hastened their inevitable death spiral.

The McCain campaign tactics have earned public opprobrium as they veered toward the obscene, one issue after another positioned to dominate news cycles. When little-known GOP vice president nominee Governor Palin strutted onto the national stage, the public and the media paused for a brief moment, wowed by the initial breath of fresh air she brought to the Republican camp. She energized the Party’s base, and renewed enthusiasm and vigor in the soulless, anemic town hall meetings of presidential contender John McCain.

She was to be the “gotcha!” to the Democrats, still smarting from their blistering Obama/Clinton gender tussle for the party’s presidential nominee. Her strong anti-abortion message enraptured the religious right. At last the Republican train seemed to be on its journey, albeit with both parties deadlocked at the polls.

But the first blush of this femme fatale’s entry on the campaign stage soon gave way to disappointment, irritability and then outrage. The public soon deemed Sarah Palin unqualified for the position of vice president, a position which would ease her into the presidency in the event of McCain’s demise. The electorate was clearly divided along party lines as she belted out unintelligible sentences and one divisive statement after another, “small-town America is where the real Americans are”, and at a recent rally in New Hampshire she assured her supporters that it was a pleasure being with them “in this great Northwest”, New Hampshire for over two hundred years being among the New England states, firmly ensconced on the east coast of America.

So after the first few weeks as the darling of print, screen and airwaves, Palin began to take potshots at the mainstream media for portraying her ignorance, causing her portrait to evaporate into a mere caricature. Her candidacy, for a long time having being viewed as a political liability, seemed to have shape-shifted faster than Kafka’s Gregor Samsa, in these final days of the campaign, as  she is being viewed as primary message-bearer of the campaign, having trumped the surly McCain in heralding that communism is about to descend on America. The Republicans are going for C-4.

McCain’s erratic shuffling after the financial crisis spoke volumes about the fundamentals of his ability to lead, and even after his commendable performances three debates later, his judgment is repeatedly being called into question, based on his feeble choice of a running mate.  The late night talk show hosts and the comedy reviews have enjoyed record viewership, having a field day honing in on his every gesture, tic and twitch as he provides enough hilarity to relieve the mounting tension with the campaign picking up the pace.

Long lauded as a war hero, McCain is squandering away every last ounce of goodwill he has earned over the years, as he remains determined in his quest for the presidency to win by any means necessary, even if it would mean departing from the central issues of the campaign, resorting to fear and smear tactics. As the polls indicate a more commanding lead for the Democrats, the McCain camp is on edge, as the players resort to stepping up on their negative attacks and the angry, racially-tinged rhetoric. Obama is not one of us.

The McCain/Palin rallies have become hatefests, their pitchfork-and-torch aggressiveness launching new waves of accusations, finger-pointing and witch-hunting. Obama’s “palling around” with terrorists, his socialist-now communist agenda, his connection to ACORN, a community-organized voter registration group, have all been grist for their rumor mill and for the recent offensive “robocalls” bombarding households nationwide.

Now, just a little more than a week before the elections, the Republicans seemed to have turned on themselves, the GOP and the RNC succumbing to their own negativity, engaging in an endless blame-game and mud-slinging.

As the old aggressive predator nation role of the US become more obsolete, it is hoped that the derisive sobriquets (Muslim-terrorist-socialist; axis of evil) reserved for Obama and Republican-designated enemies of the State will lose their sting, and that diplomacy and negotiation will replace the grandstanding of the past. The Union has entered the twenty-first century amidst turbulence, still playing warrior nation, prosecuting war on two fronts and reeling from an economic crisis, an energy dilemma and environmental uncertainty that threatens our very way of life. To follow the same path is to expect the same results.

We dare not continue the grand celebration of ignorance and anti-intellectualism that has hallmarked the eight-year reign of the incumbent leader of the free world and his cohorts; neither should we embrace the debilitating, uninspiring negativism of the McCain campaign as it seeks to reconstitute the fear and unbridled bigotry of an America less than half a century ago.

A new generation is rejecting the archaic values and intimidation tactics of the last century. The world is theirs to inherit, as some of us make our exit. It is their hope that causes Obama’s message to reverberate around the world, in this unstoppable seismic shift transpiring not a moment too soon.  Our choice is to recognize it and become part of the vanguard that gently ushers the transformation, or resist it at the peril of future generations.

McCain has every right to contest his bid for presidency, even with as formidable an opponent as Obama. But he can lose it all by staking too much on winning at all costs:  the integrity of his party, his colleagues and team members, as well as his own political reputation and legacy, in destroying his white whale.

Casting Stones – The Death of Reason