A recent letter published in the Jamaican tabloid the Star, written to the popular column “Dear Pastor“, tackled an interesting subject. Read for yourself. 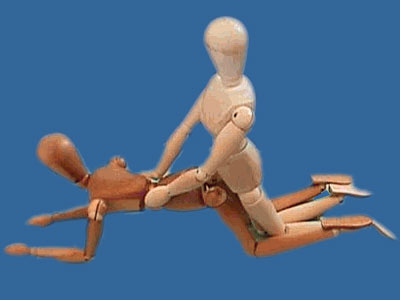 “Dear Pastor, I have been troubled for quite a while. The problem, my girlfriend, is a sexaholic. Sometimes she wants it five times for one night. This is very taxing on my body as I work very hard and cannot keep up. The other thing is, she barks like a dog when she climaxes. This scares me and I have become afraid of her. She is very pretty and I don’t want to lose her. Pastor, is there any pill she could take to curb her sex drive? What can be done about the barking? Please, help me.
H. T., St Andrew, Jamaica”

The pastor’s response was somewhat hilarious. Having explained that he hadn’t heard about barking during climax, he had heard of women making lots of noise, disturbing neighbours and of men who tried to stuff rags in their women’s mouths to stifle the loud noises.

The pastor recalled a lady “once told me that she had to end the relationship with a man because of the tremendous noise he made.”

“Some talk all sorts of nonsense, when they are in ecstasy, but I have never heard anyone barking like a dog,” replied the pastor. “It must be scary, indeed. I doubt very much that this woman can be described as a sexaholic. To some people, it is normal to have sex two, three or four times in one night. Indeed, some men brag that they have been able to satisfy their wives’ needs by having sex with them two or three times per night.”

Then came what must have been a little deflating for HT, as the pastor suggested he wasn’t able to deliver the goods:

“Your woman is requiring much from you, but you are shocked and sorry for yourself because you have not been able to keep up. I suggest you discuss the matter with your woman and if you both agree she needs help, you may contact Sexaholic Anonymous at www.sa.org/sexaholic.php.”

This must really one of those cases where as the Jamaican saying goes, “we have to tek bad t’ings mek laugh”.

Some have opined that the woman is possessed by demons that undoubtedly need to be cast out. I am quite sure many of us, including myself, believe that we are just the ones to do it; that is to perform the exorcism. Give me the bible and the Viagra, and what an unholy union that would be.

Be that as it may, HT’s letter illuminates a most serious problem, that of understanding and appreciating the value of sexually induced emotive vocals and their possible deep rooted cultural or psychological etiology. Further observation may yet have social and practical application in our love relationships.

This field of interpreting sexually emotive vocals is quite new and even more complicated; the wide variety of utterances further complicates matters, thus making the terrain even more difficult to traverse. However, I will take a stab or two at it for sure. (No pun intended)

Religious Effect
There is a potential religious impact from the use for these sexually induced emotive vocals. I for one would love such a partner because on Sunday mornings I would encourage her to bawl out “lawd Jesus” or “Halleluiah” or “Praise de lord”, if she is as loud as the writer states, surely neighbors would gather by the door for an early morning prayer meeting and blessing. Surely that cannot be beaten for the double pleasure of pleasing the Lord and Lady.

Release of the Inner Being
I suspect someone must have told her about “doggie style”, she has somehow interpreted that to mean when so strapped to respond in an emotive manner befitting the position; hence her barking like a dog. Sex has been known to have immense transformational powers. The barking in this instance is clear evidence, at least temporarily, that some form of transformation is occurring. Indeed, what HT describes may in fact be the release of the inner being, albeit a barking beast, perhaps from deep within his partner’s psyche.

Crime Fighting Effect
Given the crime situation in Jamaica I would be strapping every night, as many times as is necessary. Everybody knows that barking dogs scare thieves. No thief would dare approach my premises. There would be barking from within and without. So let her, damn it, make her bark! If not for satisfaction then most definitely do it for the safety and protection of the family. One just cannot beat a built-in security guard, barking dog and all.

This fellow, HT, seems to think he is somehow lacking in performance. However, I view the story in an altogether different light. Based on his description of “de runnings” it appears that he is definitely doing something right. If indeed he is afraid of the barking he is not alone. Many a thief will testify as to the chilling effect a ferocious bark can have on their nocturnal pursuits. Clearly what he needs is a way to evoke different, more pleasant and less threatening responses from his partner.

His imagination may be of great service to him in this regard. Inducing different sounds may require a bit more creativity and sophistication. For example HT could wear different costumes to bed hoping that his appearance and performance may evoke less threatening vocals. Were he to dress like a pussycat he might induce her to meow; like a lion he might get her to roar, like a duck he might induce quacking etc., etc. The possibilities are endless.

His other expressed short comings (if we may term it thus) in the matter of stamina and libido can be remedied as well. There are a myriad of herbal and other medicinal cures available to him should he choose to avail himself of same: strong back, wood roots, Irish moss…

Animal Husbandry
HT mi bwoy, if your imagination and creativity fail you, then plain old animal husbandry (no pun intended, since you are not yet married) may be your last best hope. You may have to resort to doing what folks have always done when facing difficult animals; tame the beast. You are going to have to get a leash and a muzzle. A chain if properly employed will help you regain control of the beast. The muzzle will quiet the figurative beast within your loved one.

You may also want to attend canine school to learn the language so you can more effectively communicate during the transformative event; a sort of call and response sequence if you will, wherein you’ll holler “arf, arf, arf,” and surely you’ll hear “harrr, harrr, harrr,” in response. After all two dogs barking are more threatening than one. But under no circumstances must you abuse the beast within your lover. Never!!!! No dog war.

When all else fails turn to the lord brethren. A full blown exorcism may have to be performed. I suggest a well endowed priest just in case the emotive beast rears its head during the exorcism. Then surely the one performing the exorcism would have to give the devil her due. Failing that then and only then “is time fi try de obeahman”. He may be your last best hope, your salvation.

Nevertheless, under no circumstances should you let go of this lover. No sah no leggo da one ya at all, as clearly she is one of a kind. She may turn out to be (man’s) your best friend after all.

Finally, Massa HT, if the barking gets too ferocious you might have to get a real handler, a master in doggie style so to speak, to take the matters into hand. Reportedly such handlers abound in Jamaica. Nuff a wi yardie want to give yu a bun, oops, a hand in quieting that ferocious beast within your lover.

Jeff McLeod is an attorney at law and freelance writer residing in Central Florida
jef_mc@yahoo.com

From Russia with Love to Sarah Palin