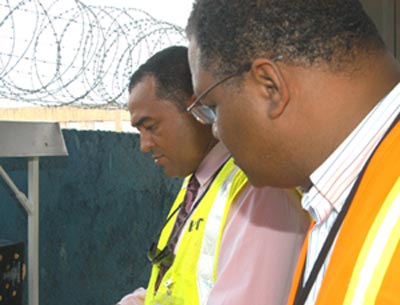 Walker with Minister of Agriculture, Dr. Christopher Tufton at the port in Kingston.

There are few public figures in our society that have earned our respect over the recent past like Danville Walker, currently cast in the role of Commissioner of Customs. In his recent tongue-lashing delivered to local importers for improprieties regarding invoicing of goods, the commissioner called no names but spared no consciences in his blistering address:

“We are not here to be your prostitutes who you pay for a service, while at the same time look at us with disdain. The sophistication of your schemes and the complicity of some government regulations that allow you to operate with impunity place you into the same boat as smugglers and other criminals who weaken our nation every day.”

Citing the under-invoicing of goods and the issuance of threats to customs officers upholding the department rules and regulations, Commissioner Walker points to the “culture of privilege” that has invaded the institution through the sense of entitlement bred by importers across the breadth of the social spectrum (brought about, I might add, by our chronic aversion to dealing with issues before they become insurmountable).

Noticeable in the commissioner’s reading of the riot act however, is the absence of any comment pertaining to those within his own department who have without a doubt enjoyed the proceeds of corruption. It is to be presumed that he is conducting his own in-house sanitisation under immense pressure, as one can well imagine the resentment now that “dolly-house mash-up.”

Commissioner Walker appears to be no politician in his hatchet-man approach to remove the overgrowth of corruption, and though he possesses a nuanced grasp of the complexities afflicting it, his forcefulness will definitely incur the ill-will, perhaps even the wrath, of those within and without the department, who may have for years benefitted from defrauding the government coffers of the revenue indispensable to financing the nation’s budget.

Walker’s stinging rebuke to importers comes on the heels of a recent incident where Contractor General Greg Christie was publicly chided by no less than Prime Minister Golding for daring to question a government decision to exempt certain public sector entities from government procurement procedures. Regardless of the latitude of his executive privileges, the prime minister’s disappointing and imprudent public censure did nothing to enhance public opinion of his commitment to preserving fairness, transparency and accountability in the procurement process.

We need more public servants of Greg Christie’s ilk, if we are to achieve these ideals. It is fervently hoped that the commissioner’s efforts to correct the ills in the system are not met with the likes of those detractors who “wanted his head” in his former position as Director of Elections, when he performed the most arduous task of reforming the island’s electoral system which had been for years riddled with loopholes.  He should be given every encouragement in this new venture, without regard for the “corns” he will be sure to “mash” in the process.

If uprooting corruption is to be realized and not remain vain rhetoric, the valiant efforts of public servants like Commissioner Walker need to be lauded.  His appeal sets a standard which should be emulated by all ministerial heads, as it sends a clear message of zero tolerance of the corrosive practices that have been winked at for decades, and should serve as a political bellwether for the Golding administration.

Walker cannot succeed as a one-man army in routing corruption in his department, no matter how steadfast, committed and courageous he may be. He will need not only the unequivocal backing of the government, but the full support of the public and the endorsement of opinion leaders in the society.  Without this resolve in place for every single institution in the public sector, we may as well continue accommodating ourselves to living under the banner of the Banana Republic.

The Decimation of the Working Class