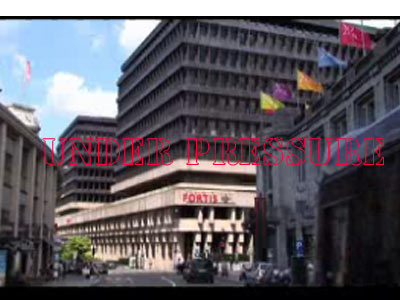 New International Monetary Fund (IMF) proposals to address the global financial crisis, that includes an estimated $650 billion dollar capital injection, sound strikingly like the package passed in the US Congress on October 3, and the additions touted by Democratic Party presidential candidate, Barack Obama.

Touting a “deleveraging process”, the proposals are set out in the Fund’s latest Global Financial Stability Report (GFSR) released Tuesday in Washington DC, and contains the suggestion that government and long term institutional investors such as pension funds inject the money with provisios that “emergency government interventions are temporary and taxpayer interests are protected”.

“Accountability of government actions is important for all stakeholders and the conditions for support should include private participation in downside risks and taxpayer participation in upside benefits,” said the . Intervention mechanisms should minimize moral hazard, while recognizing the exigency of the situation and the evident need for public support.

measures will be required to restore confidence in the global financial system,” said the IMF. “Failure to do so could usher in a period in which the ongoing deleveraging process becomes increasingly disorderly and costly for the real economy. In any case, the process of restoring an orderly system will be challenging, as a significant deleveraging is both necessary and inevitable.”

Several European governments, who had major private bank failures linked to the American financial crisis have bought some institutions or injected significant funds to intervene, going against the wishes of popular conservative free-market thinkers who believe the markets should be allowed to correct themselves.

The Fund itself has traditionally pushed economic deregulation as a precondition for loans to governments in crisis. But the current money crisis is being viewed by many as the biggest catastrophe since the great depression of the 1920s-30s that is interpreted as a primary cause of World War II.

“Confidence in global financial institutions and markets has been badly shaken,” said the report. “Threats to systemic stability became manifest in September with the collapse or near-collapse of several key institutions.

The October 2008 World Economic Outlook notes that the strains afflicting the global financial system are expected to deepen the downturn in global growth and restrain the recovery. Moreover, the risk of a more severe adverse feedback loop between the financial system and the broader economy represents a critical threat.

“The combination of mounting losses, falling asset prices, and a deepening economic downturn, has caused serious doubts about the viability of a widening swath of the financial system. The ongoing deleveraging process outlined in the April 2008 GFSR has accelerated and become disorderly — marked by a rapid decline in financial institutions’ share prices, higher costs of fund-ing and credit default protection and depressed asset prices.

“One result has been sudden failures of institutions as markets have become unwilling (or unable) to provide capital and funding or absorb as-sets. Piecemeal interventions to address the attendant liquidity strains and resolve the troubled institutions did not succeed in restoring market confidence, as they have not addressed the widespread nature of the underlying problems.

“The intensifying worries about counterparty risks has created a near lock up of global money markets.”

Declaring that “restoration of financial stability would now benefit from a publicly-stated collective commitment by the authorities of the affected countries to address the issue in a consistent and coherent manner”, the IMF corrective measures call for “measures that are comprehensive, timely, and clearly communicated”. These include:

“In applying existing or new regulations, authorities should avoid exacerbating procyclical effects. The objectives of the measures should be clear and operational procedures transparent,” said the Fund noting that measures should aim for a consistent and coherent set of policies to stabilize the global financial system across countries in order to maximize impact while avoiding adverse effects on other countries.

They should also “ensure rapid response on the basis of early detection of strains. This requires a high degree of coordination within each country, and in many cases across borders, and a framework that allows for decisive action by potentially different sets of authorities.”

Consequences of Financial Crisis on Low Income Countries Can be Dramatic