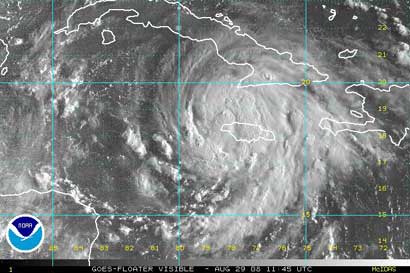 Police confirmed two deaths Friday, in a north-east Kingston community, caused by flooding associated with Tropical Storm Gustav that lashed the island Thursday night. One person was also reported missing and there were landslippages and at least one house was washed away in the area, police said.

At least 43 per cent of the island’s electricity consumers were without power, a utility company spokesperson reported.

Still, Jamaicans were breathing a sigh of relief as Gustav moved away to the west of the island Friday morning, although because of its huge bands, it continued to dump inches of rain with storm force winds that have flooded several communities, lifted roofs and left several people homeless.

Emergency workers and the Red Cross were in the field assisting in recovery and the authorities were preparing to reopen Kingston’s Norman Manley International airport to which flights had been cancelled as the storm neared Thursday.

There were reports of some looting in an eastern parish Thursday night but a police emergency in two parishes was related to the island’s long-standing crime and murder problems.

Gustav hit Haiti as a hurricane Tuesday and on Thursday. Haiti reported its death toll was 51, with more than 6,000 people in shelters.

The following is from the NHC bulletin issued at 8:00 a.m. EDT:

Hurricane warnings remain in effect for Jamaica and the Cayman Islands. Preparations to protect life and property should be rushed to completion.

A tropical storm warning remains in effect for the Cuban province of Granma.

Interests throughout the Gulf of Mexico should monitor the progress of Gustav.

For storm information specific to your area, please monitor products issued by your local weather office.

Gustav is moving toward the west-northwest near 8 mph, 13 km/hr. A turn toward the northwest is forecast by tomorrow. On this track, the center of Gustav will leave Jamaica this morning, move near or over the Cayman Islands later today or tonight, and move near or over western portions of Cuba on Saturday and Saturday night.

Maximum sustained winds remain near 65 mph, 100 km/hr, with higher gusts. Strengthening is likely during the next couple of days, and Gustav is expected to become a hurricane later today or tomorrow.
Gustav could become a major hurricane before reaching western Cuba.

Tropical storm force winds extend outward up to 140 miles, 220 km from the center.

Coastal storm surge flooding of 1 to 3 feet above normal tide levels can be expected in areas of onshore winds in the hurricane warning areas.

The next advisory will be issued by the National Hurricane Center at 1100 am EDT Friday.