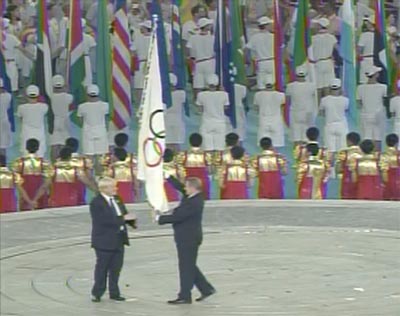 Jacques Rogge hands over the Olympic flag to the mayor of London, Boris Johnson, in Beijing.

The 2008 games ended with a bang Sunday and now it’s on to London 2012 for the next summer Olympics.

Beijing was a landmark year for Caribbean athletes, with Jamaicans dominating the sprints taking 11 medals, six gold, three silver and two bronze to be ranked 13th overall, followed by Cuba in 28th with two gold, 11 silver and 11 bronze; Dominican Republic, 46th with one gold and one silver; Trinidad and Tobago, 60th, two silvers and the Bahamas, 65th with a silver and a bronze.

With 204 countries participating and only 81 receiving at least one medal, this result was yeoman for countries with such relatively small populations and little material resources.

In 2012 Jamaica will be celebrating 50 years of political independence from Great Britain. In 2012 it will be 64 years since Jamaica first performed at the moden Olympics and did very well, laying the foundation for the strong tradition of success and excellence in track and field athletics.

In 2012, Jamaica should target geting medals in all 14 track sprint events for men and women in flat and hurdle races to beat the 2008 haul of 11 medals. That would be a fitting message to its once colonial masters that after 50 years Jamaica can at least boast one area where it is undoubtedly a world leader led by descendants of slaves of the rural peasantry and urban inner-cities/ghettos/gully banks*.

*Jamaican gullies are open, paved waste water and drainage ways and the poor often build houses on land they capture along the banks. The resulting communities are usually crime ridden and the gully courses usually are escape routes for criminals. After his wins in Beijing, Usain Bolt did the “gully creeper” dance now popular on the island – a celebration of survival instincts.

Lewis Hamilton – the Obama of Formula One Grand Prix

Well congratulations to our athletes, for putting us pass our colonial masters. What I hope to see is money being spent so that more Jamaicans can have a better life. No extra-judicial killing. No property robberies, individuals taking responsibility fo heir actions. Driving on our roadways, giving eight hours for eight hours pay, family life becomes real family life so that domestic violence is eradicated. Teach non- competitive sports in schools, stop the competitiveness at the work place. Have we built a nation in the years since independence. Mark you, it was good to see our runners out do other more powerful nations, so among the people is the will to succeed. Where are the people who hould have the will to change the death and decay?

In one country, which you may not believe, non-competitive sports are taught in their primary schools. This in order to bring the two two together. Even in their language classes all students must learn three languages, the native language of the two peoples, who mistrust each other, and English as a second language. All young persons who attend the government institutions have to learn all three. Non-competitive sports are taught to two different age cohorts in the same class, grade six with grade one; the idea here is that the older ones must learn to take care of the younger ones. I guess Oliver you may not guess which country this is, for the international news networks would not give out that info. Maybe you will say that I too only focus on the negatives here, but I was born before independence, and I see very little effort form the state to close the great divide between our people. After all the shades of skin colour should not mean so much here. The most of us have a common ancestry.

I just wanted to know what is defined as non-competitive sport. Fishing perhaps ?

Good question Oliver – sport fishing is competitive. Competition is healthy whether competing with a team, individually, or against oneself. It stimulates positive social and individual values such as teamwork, innovation, self-worth, personal growth, etc.

If there is no competition, there will be nothing to improve or change. If we do not learn to compete in a free and fair manner that is respectful of each other’s abilities and skills, we will collapse internally and fail externally with our trading partners.

Griffins – I too was born before Jamaica’s independence, but I have seen sustained changes over four decades in Jamaica. It could be that I have been deeply interested and involved in those changes, but less focused on listening to the foreign press…

Oliver, have you ever heard of primary school children being taught to fish? The state of Israel has a complete physical education curriculum for co-operative sports for that age cohort. It is further up the levels, when the students are exposed to methods of critical thinking, that competitive sport is introduced. You must understand that the public system caters to all religious beliefs. You must also understand that each religious group has itsr own schools too, just as our public and private ones here. Trust me those cooperative games are just great.

I have heard of primary school children being taught to fish and blind to sail at Shake-A-Leg in Miami. It was not a formal class but part of their tactile learning via competition. Cooperative sports do have competition as central part of the lesson plan.

What identifies cooperative competition is the rewards/incentives scheme. Is it winner take all or do we also recognize all who made the effort to compete fairly, with respect for all receiving the highest award?

When I attended the ISVCF camps in Morelands in Jamaica, we competed cooperatively. The same is usually done in Pee Wee Leagues in the US although some parents sometimes forget the citizenship and self-worth building goals during kid’s Play Age.

When I taught at a Catholic High School in Miami, Pace, we were challenged to introduce critical thinking components in every area including sports. However, the key component was always competition either in groups/teams, individual, or against oneself. In competition, we set a practical goal and strive to attain/exceed then raise the bar.

Thoughtful parents do this with infants to develop their cognitive and behavioral aspects, and great teachers do this all the time with their students.

By the way, ole time three-legged race and egg-n-spoon relay were cooperative sports.

Its a good thing Bolt was not exposed to this non competitive sports experience. If he had, as a true champion of that fine art, he may have decided to wait up for the other fellows and reveled in the thought of capturing the prized eighth position. And you can guess the number of people waiting to meet him to congratulate him on this monumental achievement — probably about eight!

Richard when I asked about fishing I was thinking specifically of Jamaica.

Oliver: Genetis and training is important in sports. Try as some of us think we could not be a world class runner. Bolt is o.k what of the others who in our small country feels and displays this very competitive nature. The competition to have the biggest house, the most expensive motor vehicle has pushed the drug trade. It distroys marriages, as members of the opposite sex competes for the man or woman who has the attributes, especially money , so illicit affairs are promoed. One man wants to compete with his peers re how many baby mothers he can have. Hello this competion affects all our lives. Do not agree, say so but think about what I have said here. One can think critcally without bein competive.

Does it really matter where in the world a primary schools child is taught how to fish and participate in fishing competitions? I think not; what matters is if the teacher (1) employs different teaching styles to match different learning styles, (2) enhances the curriculum with field trips to learn about fishing, and (3) recognizes the need to bridge the theory with the practical – all learning does not occur in JA classrooms.

Genetic and training are important, but winning the gold medal is a higher level activity that involves mental focus, discipline, and determination. A mediocre athlete with these three qualities will always succeed against those with the genes and training. For example, JA had the fastest women’s relay tem at the last Olympics, but lost (DQ) to the slowest team who won the gold medal.