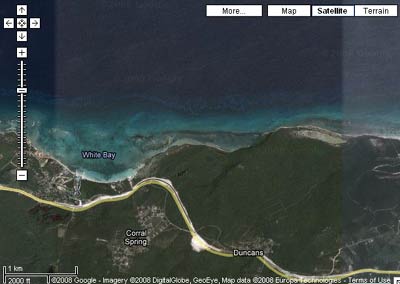 Google Map of the area from which the sand was stolen.

The rip of tons of white sand from a prized beach along Jamaica’s north coast is causing consternation in the international travel community. And local environmentalists say the robbery at Coral Spring, Trelawny, is but tip of the sand dune in the illegal mining of the islands coasts to enhance subpar beaches at upscale resort properties.

“It’s amazing how Mother Nature can ‘create’ a huge beach like that out of nowhere,” wrote one poster on a Jamaica forum on the Trip Advisor Web site where pictures were posted of a new beach at a new western Jamaica resort that was said to lack a good beach – until recently. “I would guess it’s about 500 loads too. This goes beyond criminal.”

Another forum member has suggested a chain letter on the illegal event to send a message to the perpetrators.

“Boy oh boy wouldn’t that be a “message” sent to the culprits that tourists and locals alike WILL NOT TOLERATE this kind of raping & pillaging of the beauty that IS Jamaica,” the poster wrote.

Abeng News understands that environmentalists in Jamaica are disturbed that the current theft has garnered public and government outrage only because of the influential consortium membership of local millionaires who had intended to build a six star resort on the property abutting the beach.

An executive of a leading environmental non-governmental organization which is lobbying the government to take action, is taking to task the island’s National Environment and Planning Agency (NEPA), for its tardiness in responding to other major incidents of this type even when evidence and investigative help were offered.

NEPA is responsible for Jamaica’s “sustainable development by ensuring protection of the environment and orderly development”. The government has ordered probes by NEPA and the Island Special Constabulary (ancillary police) into the latest heist.

Environmentalists say forensic sedimentology work should be ordered to assist in solving not just the present Trelawny case but other unsolved cases of beach theft.

Under Jamaican law, beaches cannot be owned by individuals but property owners have access rights and must allow the use of the beach to anyone who can get to it without encroaching on their land.

Theft of the sand therefore is not from the landowners but the people on whose behalf the beach is held by the Crown (State).

Declared a Trip Advisor writer: “I hope & pray that PM Golding finds/catches the culprits & makes an excruciating example out of them… otherwise, what next? Dunn’s River Falls moving to the South Coast? Green Grotto Caves mined of its stalactites? Wetlands used for dumping of human waste?” 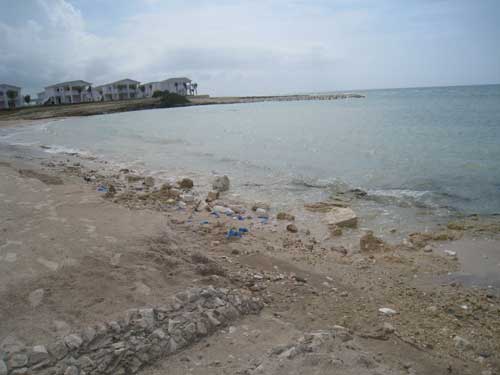 Above, before picture of a Jamaican beachfront development. 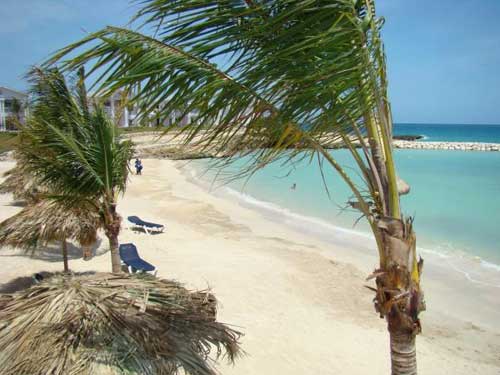