Junior high schools were established in 1909, as a transition point for students between elementary and high school. Junior highs were established primarily to track student academic progress, enabling administrators to either send students to high school for two specific and primary purposes – either to pursue academic subjects for those deemed college-bound, or to ensure a vocational education for those whose were deemed not academically sound, and would therefore join the workforce immediately after high school. 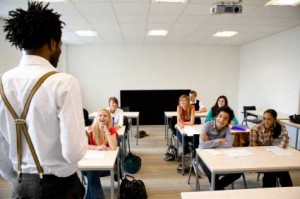 This scaled-down version of high school was not what school administrators had intended, and “was not the original intent of those who were committed to providing an educational environment designed to address the special needs of early adolescents, through the creation of junior high schools.” (Kohut, 1988).

As time progressed, the junior high school model came under a lot of criticism for its lack of adolescent psychological and caring support; and was thought to be too curriculum-driven in terms of both teaching styles and classroom environment, and most importantly relied too much on grades to track and separate students according to academic ability. This tracking was a major flaw of the junior high, as it grouped students according to grades, the more intellectually inclined were grouped together, and the slower learners were tracked and placed together.

Both of these educational models served us well, but the adolescent guidance-directed format of the middle school has prevailed and has become very popular over the years.