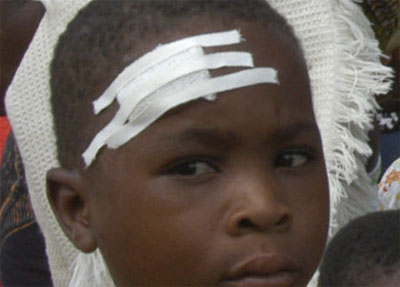 The irony of the newspaper headline, “The Death of Hope” was poignant.

Hope Arismendez was an eight year-old girl who was raped, beaten and whose throat was slit and her body left for five days in a cane field by her mother’s boyfriend. Currently, there are no laws that protect the child here in Trinidad and Tobago, a place where children seem to be under siege. Now commonplace in this country are incidents of rape, buggery, incest, murder, poisonings and child-on-child crime to name a few.

These atrocities sound like a child crime-ring in some industrialized country. But wait, isn’t that what we are calling ourselves here in Trinidad and Tobago, a “developed” country, the pride of the Caribbean, the sophisticated industrialist with the Caribbean’s most intelligent, most tech- savvy? After all, education is even free, all the way to university. Pardon me if I beg to differ. It has been argued that we now produce more scientists and IT professionals in the Caribbean, but where has the study of development of the human potential gone?

A closer look at the issues that beset T&T will uncover a long history of violence in the homes, in the schools, in the work place. Violence is not only physical, it can also take psychological and religious forms. And so today, the ravages of slavery, indentureship and other hardships live on in the physique of this nation.

Where do we begin to address these issues? Indeed the government has a part to play, but the crux of the matter however is the family, the home, or the lack thereof. The child lives what he learns and then goes out and shares that knowledge with friends and community. There is a saying that the student always betters the teacher, and an African proverb which states that, “it takes a village to raise a child.”

But with progress has come regression. Our country now boasts a vibrant energy-based economy of gas and oil economy. The large amounts of disposable incomes are made possible by greater opportunities for employment, greater spending power, as a result more time required of parents to be away from their children, less attention is paid to the needs of the family and child. It is said that child abuse can happen anytime, anywhere and in any form and many things can trigger the abuse such as alcohol, jealousy, delinquency, divorce or separation and a myriad other factors.

Today‘s children do not know who to trust, so everyone is being held in suspicion. The once carefree teenager now insists on having a parent or guardian within reach at all times. They are being cautioned by today’s lyrics in songs such as the one by Jamaican reggae artiste, Queen Ifica, which says, “Daddy Don’t Touch Me there, I’m gonna tell on you one day, I swear.”

This loss of innocence is sometimes too much for the young mind to comprehend. The fear, distrust the uncertainty. The resulting paranoia. Recently, upon hearing of the fate of young Hope, another little girl took the chance to confide in her friend that she was being was being molested. The carefree abandon of yrsterday’s childhood has wilted under the withering glare of watchfulness.

The long overdue implementation of The Children’s Authority Act must come now. This movement was initiated in 1969 as a campaign of Soroptimist International of Port of Spain, headed by Dr. Norma Demas. The research was transformed into a formal document, “Every Child Matters, The Child in Trinidad and Tobago.” The campaign at that time sought to bring to the attention of the Government, the necessity for the establishment of a Central Authority to protect the children of Trinidad and Tobago from abuse and neglect.

So hope is not lost. Families, citizens, social groups and the government will stem this tide of despair of the nation’s children. The legislation which was approved eight years ago by the opposition government (UNC), then in power, is said to be next on the agenda for parliament to review the amendment for its final ratification.

The object of the bill is to treat certain deficiencies in the 2002 legislation, and the bill states that this authority will be mandated to take all reasonable steps to prevent children from suffering ill-treatment or neglect.

The bill states a child is in need of care and protection where the child:

Powers of the Authority

With these provisions in place, it is hoped that though we cannot revive Hope Arismendez, we can quietly restore the hope we have lost for the children.of Trinidad and Tobago.

The Junior High and Middle School Models in America