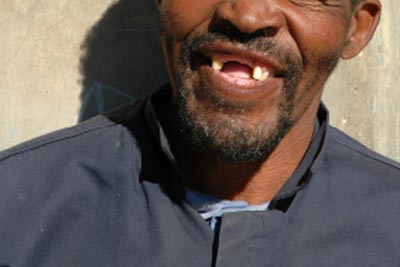 Preparing for his gold teeth.

Ivan Harris was not a very smart man. Anyone who would ask a dentist to remove all his good teeth and replace them with false teeth is indeed a certified idiot.

Ivan had the opportunity to go to the USA on the Farm Workers Program. He was so excited that he couldn’t stop talking about it. He suddenly changed into this person that no one in the district of Cocoa Piece recognized anymore.

He went to the US and spent six months there. When he returned, he was a new man. His walk and even his speech changed. It was the strangest thing to behold.

Before Ivan left Cocoa Piece, he had a beautiful smile. It was his most alluring asset. Even the rich girls, who, one would think, had no time for Ivan, flashed him a smile when they saw him. He was a handsome man.

When Ivan returned home from the US, he rose early one morning and for almost three days, no one knew where he was, or what had happened to him. Even his girlfriend, Clarice, had no idea where he was.

Ivan went to Kingston to a relative’s house to spend some time. Apparently, they had advised him that he would not be able to return home immediately after the dental procedure.

Three days later Ivan walked into his yard with two bags of groceries, his face swollen, and displaying a toothless grin.

Clarice was in the kitchen preparing dinner when she saw Ivan at the gate. She ran out to meet him and received the shock of her life.

When Ivan began to speak, he sounded like he had a mouth full of hot potato. His jaws hung like that of Papa Joe’s old mule. His eyes were swollen, and he had large bags under them as if he hadn’t slept in the three days he was missing.

I was sitting on a rock in my backyard, washing some clothes, and watching the two of them through the Hibiscus bush that separated our properties. Clarice’s eyes grew as big as saucers and she stood, hands akimbo, as if she was ready to slap him silly. Somehow she managed to hold her temper. I guess she felt sorry for him when she saw his bare gums and felt that someone must have beaten him really badly.

I didn’t believe that anyone had beaten Ivan. If anyone got a beating of that magnitude, so that he lost all his teeth, I don’t expect that he would be able to relate the story three days later.

They had taken the conversation inside their house and I couldn’t hear any more details. I dried my hands in my old apron and went down the road to my friend Cherry’s house to tell her that Ivan had returned.

I did not even get to tell her that Ivan had come home before she began telling me about the phone call she received that morning. Cherry’s cousin, Lamp Ile, told her that he had gone to the dentist for a few extractions, and he saw Ivan at the dentist’s office. He told her that the dentist and Ivan were arguing and he heard the dentist tell Ivan that it wasn’t a good idea to remove all his perfectly good teeth and replace them with false teeth, gold or otherwise.

I pulled up a stool Cherry had on her veranda and sat down. I couldn’t believe what she had told me. I couldn’t imagine anyone being that stupid as to remove their perfectly good teeth, only to replace them with false teeth.

Cherry and I sat quietly looking at one another in shock. She offered me a beer and since it was after 3 o’clock in the afternoon and I had already eaten, I accepted. I had a half of a cigarette that I had saved and I took it out of my brassiere. I lit a match and held the cigarette over the flame to dry the section that was damp. I then lit the cigarette and pulled on it long and hard. Then we saw Clarice approaching.

Cherry dropped the bottle of beer on her big toe, almost losing the entire contents on the floor. Clarice walked up to the steps and sat down with her back to both of us. Cherry looked at me, pushing her mouth up at Clarice. She wanted to hear the news from Clarice but did not want to ask.

Cherry went inside to get the rum and I sat silently, patiently waiting for her return before I continued. I knew she wouldn’t want to miss a word. To fill the gap, I asked Clarice about the children, and when Ivan was going back to America. Clarice didn’t say a word.

At first I was insulted, but then I figured that the woman was so upset, she needed time to compose herself before she could speak. That mash mouth that Ivan brought home was quite a shocker.

Cherry returned momentarily, but I was so anxious to find out what was on Clarice’s mind that it seemed like Cherry was gone for an eternity.

I fell back against the railing on Cherry’s veranda. I was glad that it was in such close proximity, for I would have fallen flat on my back. The laughter was churning in my stomach but I couldn’t get it out. All I could say was “Woyoyi!”

I curled my toes as tight as I could to stem the urge to laugh. I knew that if I succumbed to the urge I would surely wet my pants. I really didn’t want to hurt Clarice’s feelings either, because I knew she was ashamed. However, Cherry did not exercise that level of control and was sprawled out on the floor, fluttering and whooping like an owl.

My superb self control was for naught, for I joined Cherry on the floor right then. I laughed so hard I cried. I could not even give any more thought to Clarice’s feelings at the time.

Cherry and I were just about calm, when we heard Ivan calling Clarice and the laughing fit erupted again.

About a month later, Ivan announced that he was going to Kingston. Cherry and I assumed that he was going to collect his new teeth. Big Mout Iris had passed by the day before he was due to leave and saw him in his yard playing dominoes with some of his friends under a Sour Sop tree. She couldn’t miss the opportunity to ask Ivan about his teeth.

“Den Ivan, a wen yu a guh get yu new plate?” she inquired.

He then cleared his throat and said, “Pass mi dah rum bokkle deh mek a full up mi glass!”

I wondered as I sat at my bedroom window, how Ivan could even entertain the thought of having all his teeth removed, and for no good reason. It was then that I heard one of the men at the domino table ask him the very question that I had been pondering.

I stood up immediately and leaned out the window, resting my elbows on the window sill. The wood was rough for the house was old and the paint was peeling terribly. The window sill squeezed my elbows but I couldn’t make a sound, for I didn’t want anyone to know I was there listening, and I needed to hear the explanation.

I sat down hard on the bed foot, stunned.

I ditched the old apron and slammed the front door shut behind me as I marched off to Cherry’s. I had to tell her what I had just heard. I could not believe that any sane person, in America, or anywhere else in the world, would seriously consider, let alone go through with such a foolish thing.

I strolled up to Cherry’s verandah and, as I got closer to the front door, I heard multiple voices coming from inside the house. It seemed like Cherry had visitors. I turned around to go back home. I had planned to wait until later that evening to visit after her company was gone.

She had caught sight of me as I turned to leave.

I walked up to the veranda and Cherry opened the door. I removed my slippers and stepped inside. Cherry always had her floor Rexo shine. I looked at the young lady sitting in the settee and immediately looked at the picture Cherry had on the breakfront straight ahead. It was the same young lady.

We said hello to each other and Cherry offered me a beer. I sat down on the chair next to a side table she had between the settee and the wall. I looked at Cherry with a desperate look in my eyes, for I wanted to impress upon her the urgency of my visit. I couldn’t quite figure out why Ivan’s decision was so important to me but I needed to corroborate this outlandish story, and if anyone could find out the truth it was Cherry.

“Mi did guh a docta fi guh fin’ out wah mek mi back a hat mi sumuch,” I replied.

Joslyn threw back his head and laughed so hard he began to choke. Cherry jumped off the settee and began hitting him in the back. Joslyn coughed and laughed until tears streamed down his cheeks. Suddenly, I didn’t think it was funny anymore.

I looked at Joslyn’s daughter, Christine, and she was in stitches as well, even though she did more to control her laughter. I suspect that she didn’t want to ruin her make-up, as she dabbed her eyes repeatedly with toilet paper.

Then Christine spoke up.

I felt numb. I no longer had the urge to laugh. I realized that a terrible catastrophe had come upon Ivan.

I went home and sat by the window staring out into the roadway. I remembered the time I had asked Doreen, down the road, to dye my hair. I had gone to Kingston and seen some women with burgundy hair color and was very excited about it. I remember walking into the MedicineRx pharmacy and purchasing a bottle of hair dye. The problem was that I couldn’t decide which was the correct color and asked the young woman at the cash register for help.

Suffice it to say it was not the right color and I walked out of Doreen’s house with my head tied up like a mad woman. Instead of burgundy, my hair came out looking like a woodpecker’s belly and parts of it looked like a bald head John Crow. Big Mout Iris was merciless, asking me why my head looked like ‘fiah run troo it’.

About J May Afflick

The Frats Quintet: Jamaican Music Before the Ska Years