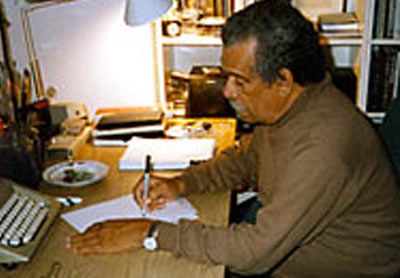 Nobel laureate Derek Walcott is slated to appear at Calabash 2008, the three-day literary festival of readings and live music at Jake’s in Treasure Beach, Jamaica, over the Memorial Day Weekend, May 23–25.

“I am very happy to be coming to Calabash as I have heard good things about the festival and have many Jamaican friends,” a release from the organizers quotes the St. Lucia-born playwright as saying. “I consider myself an honorary Jamaican.”

Walcott, the 1992 Nobel prize winner for Literarure, will be reading from his work and discussing his life and career with Ghanaian-Jamaican poet and playwright Kwame Dawes at noon on Saturday, May 24.

“Any opportunity to speak to one of the most important poets in the twentieth century is a gift that only a fool would allow to pass,” says Dawes, a resident of South Carolina and a recent recipient of that state’s Verner Governor’s Award for the Arts. “Derek Walcott is always interesting and inevitably brilliant, when he talks about art, the Caribbean and what it means to be alive.”

The festival will also feature a 75th anniversary reading of Claude McKay’s classic novel Banana Bottom by some of the best dramatic voices in Jamaica—Eddie Baugh, Barbara Gloudon, Denise Hunt, and Lloyd Reckord.

The festival is adding to the storytelling mix with a screening of the director’s cut of the late Perry Henzell’s second feature No Place Like Home. An experimental film that differs sharply from The Harder They Come Henzell’s action-packed first feature, No Place Like Home is a dreamy look at Jamaica in the late 70s as seen by an American television producer (Susan O’Meara) who hires a local taxi driver (Carl Bradshaw) to help her pursue an American actress who has abandoned a commercial shoot.

Calabash wouldn’t be Calabash without the Midnight Ravers beach party on Friday evening and the Calabashment concert on Saturday night. This year, Squeeze will spin hits from the 70s and 80s at Midnight Ravers, and Rootz Underground will open for Chalice at Calabashment. On Sunday afternoon, singer/songwriter Bob Andy will perform a semi-acoustic set of his greatest lyrics with a supporting cast of Wayne Armond, Ibo Cooper, Seretse Small and Stevie Golding.

Calabash 08 is a production of the Calabash International Literary Festival Trust.

The Frats Quintet: Jamaican Music Before the Ska Years