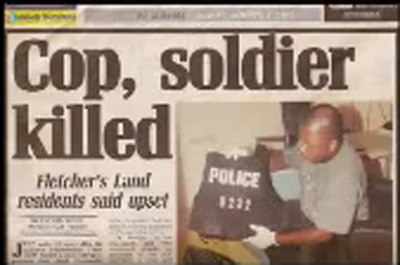 Amnesty International has taken a decidedly more nuanced approach to its reportage on murders and police killings in Jamaica. Perhaps in response to critics who have contended that the London-based organisation was anti-police and did not show sufficient concern for the victims of criminal killings, the role of gangs was highlighted in the report issued April 1.

“Criminal gangs make up a small proportion of the community population but their actions are devastating: they keep thousands of people living in constant fear and provide an excuse for government officials and the society in general to label all community members as criminals,” said Kerrie Howard, Deputy Director of Amnesty International’s Americas programme.

A release from Amnesty on the report says that poor inner city Jamaicans are left at the mercy of gangs and abusive police officers who are rarely, if ever, brought to justice for human rights abuses.

According to AI, the Jamaican authorities are wilfully neglecting the poorest communities by failing to tackle the violence – and its causes – that is shattering inner cities. This particularly includes abusive policing methods that lead to hundreds of fatal shootings and extrajudicial executions.

“Poor inner city Jamaicans are paying the price of this public security crisis with their lives. They are being held hostage in an endless confrontation between gangs and police officers who kill with impunity,” said Howard.

Jamaica has one of the highest murder rates and police killings in the Americas with around 1,500 homicides and 272 police killings in 2007. Gang leaders use the vacuum left by the absence of the state to control huge aspects of inner city people’s lives — including the collection of “taxes”, allocation of jobs, distribution of food and the punishment of those who transgress gang rules.

Despite the violence, community members are reluctant to report abuses due to fear of reprisals by gang leaders, lack of confidence in the judicial system and mistrust of police officers working in their communities.

The report cites the case of 18-year-old Ravin Thompson who was shot by police and soldiers in July 2007, while talking to his aunt at her house. The officers had been pursuing another young man who ran into the home.

Ravin’s aunt insisted on accompanying him to the hospital in the officers’ jeep but, while on route, she claims a soldier pushed her out. When she finally arrived, Ravin was dead. The autopsy later revealed that he had four gunshot wounds.

“Yet Ravin’s aunt and others present at the shooting were certain he had only been injured in the arm and shoulder. They claim he was murdered in the jeep, before arriving at the hospital,” AI said.

The police recorded the incident as a “shoot-out”. They initiated investigations but, to Amnesty International’s knowledge, no officer has been charged in connection with Ravin’s death.

Last week, the police high command in Kingston said that the officers involved have fled the island and are being sought.

“There are many good serving police officers in Jamaica who risk their lives every day to help improve security for Jamaican citizens. However, until human rights abusers are brought to justice and corruption purged they won’t be able to make a change,” said Howard.

Amnesty says it has called on the Jamaican authorities to take urgent and effective measures to tackle the underlying causes of this public security and human rights crisis – including the reduction of homicide rates in inner cities, the introduction of human rights-based policing and the reform of the judicial system to improve access to justice.

“The conversation that needs to take place in Jamaica is no longer about ‘ifs’ or ‘hows’ but about when will the urgent changes be made in order to stop the crisis taking any more lives – and the answer must be today,” said Howard.

Recollections of MLK, 40 years to the day