When Joseph Manley speaks about his musician wife, Della, he meticulously selects his adjectives as though he is weighing their worthiness before attaching them to her name. It tempts you to think when he counts his blessings, perhaps, he counts her twice.

“She is simple and honest, she’s one of those very, very genuine people…no airs and graces, no pretensions…she’s genuinely humble and delighted when people tell her they like her,” he says, making no effort to veil his admiration for her.

And by all indication, Joseph is spot-on.

Della Manley, who rejuvenated Jamaica’s alternative music scene in the early 1990s with her debut album, Ashes on the Window Sill, finds every excuse to evade self-praise but springs at any opportunity to share her utter shock with illustrious reviews of her work. “The other day, I was reading an article in the Gleaner, and it blew me away…it rated Ashes as one of the top three, female albums…in the same category with Marcia Griffith’s Stepping, and Judy Mowat’s Black Woman.” As though she is waiting for a response with a similar vein of surprise, she pauses.

“I was put in the same category with Marcia and Judy, like wow! I was so surprised… That’s the last thing I expected,” she exclaims. And Della, whose reputation for a subtle mien precedes her, rarely exclaims.

With an acoustic guitar as her instrument and a gossamer tone as her vehicle, Manley, is an acclaimed, lyrical raconteur of social commentary. She transforms delicate imagery into an art-form to voice her grievances with politically laced issues that, if told in any other language, would be fodder for incendiary exchange – from the US 1983 Grenada invasion, to the nonchalant response to, and more often, rudimentary interest in environmental degradation. 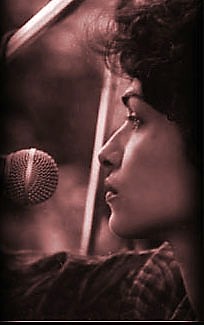 Despite her reference to world affairs in some of her tunes, the 48 year-old singer, reveals she generally has sparse interest in politics. “I am very apolitical,” she declares. “But when I was in Cuba, that experience heightened my awareness of certain things.”

After her marriage to Joseph in 1979, Della moved to Cuba with him for four years. They both enrolled at the University of Havana, where Joseph read for a degree in Planning and Information Technology, and she studied Languages. She says her most valuable take-away from the communist island is seated in Cuba’s approach to priorities.

“They were not so engrossed in balancing budgets…it was more about nation-building and education,” she reveals. “I understand it’s different there now, but I didn’t see any beggars.” She recounts her encounters with the Cuban people. “They were much like us, very hospitable, but so simple…I loved their spirit, their music…they had so little, but so warm.”

“I do not think it will change anything,” she says of Castro’s recent decision to step down from the country’s presidency. “I don’t think anything radical is going to happen, but I am no authority on this subject.” She giggles for a second, in disbelief her counsel is sought on this matter.

Della, who enjoyed an “excellent” and memorable relationship with father-in-law, Michael Manley, says the former Jamaican prime minister made notable contribution to her work, and was one of her succors and die-hard cheerleaders of her mission to make music a central part of her life and career.

“He took the time to help me a lot with my diction…he would sometimes say, ‘Della, sing that line over,’ and suggested ways that I could improve my delivery…he was very supportive…in the last couple of years (before he passed) he would do what he could to help me with contacts to get into music.”

The sublime musician remembers the iconic, political leader most for his dexterity in myriad subjects and shares her amazement with his Polymath proclivities.

“He was not singularly focused…there was nothing that he wasn’t interested in … sports, people’s problems …everything …. he was fascinated by everything, and was consistent in whatever he found interesting.” She adds, Manley, who was the historic patriarch of the prominent family, “had an extraordinary vision.” She opines, “he genuinely wanted to make people’s lives better; a very powerful force even to his last breath.”

Della, who is mother to two teen-aged daughters, says her children, once their last name is mentioned may experience either extreme of love or hate. “Certainly, those who were displaced in the 1970s would feel differently toward them than those who were supporters of their grandfather.”

One of the most regrettable changes that Della sees in her industry is the easy access to the work of musicians via on-line portals.

“You can no longer rely on this to make a living…. It’s so easy for people to download and distribute your stuff.” She thinks opportunities to expose her genre of music in Jamaica are few and far between. “Jamaica is a dancehall country…When I just started, I worked extensively on the North Coast and I see that the crowd is different … tourists are different now; this type of tourists prefer a more loud kind of music.”

As such, the talented crooner, who also writes many of her songs, has always diversified her professional portfolio. The polyglot taught English at the Kingston-based Language Training Centre, and also at one of the Diplomatic Missions in the capital city.

Manley thinks the recent proclamation of February as Reggae Month “is all good.” She believes the island’s musical legacy is “our best asset and we need to focus on it … incorporate it as part of a formal system where it is accessible to our people.”

Where the Bob Marley National Hero debate is concerned, Della has her own views. “He has been a voice and an ambassador but I don’t think he even needs that kind of title…”

Although she seems bashful in some of her public appearances, Della’s flexibility and eagerness to explore various musical styles, led to her sojourn into the renowned, live jam sessions of Inna di Yaad, brainchild of revered musician, Earl ‘Chinna’ Smith, who also played guitar on I know and It’s OK, two of Manley’s popular songs from her latest Barbican Square album.

“Inna di Yaad is a different environment from what she is used to…. Here, it’s strictly Rastafari, yet she is comfortable and blends in,” reveals Paul Banks, who managed Della’s career during the “Ashes days”. He continues. “The Twelve Tribes of Israel invited her to perform at the 40th anniversary show and she was well received,” even though her style and genre are different from that of this group.

Banks, who also co-produced I Know and the ska version of It’s O.K. with Melbourne ‘Dusty’ Miller – leader of the Fire House Crew and Reggae star, Sizzla’s band – admires Manley’s intelligence and thinks this quality makes their team effort “stimulating.”

Influential poet and musician, Mutabaruka, also regales the petite musician with kudos for her musical prowess.

“She’s unique because she keeps a certain tradition that’s not popular… She’s calm, not aggressive and has an international folk flava, like a Joni Mitchell… It’s very important to be unique instead of group-up.”

Mutabaruka, a radio-talk show host and respected opinion leader, likens Della’s style to his. “I do the same ting… I keep my own tradition… Della may not have a lot of number one songs but because she keeps her own style, she will linger.”

Della, who collaborated with Muta on I Know, which received most airplay from Barbican Square, says their duet was a “complete buk-up.”

“We were in the final mixing stages; Muta felt a vibe and got into the mixing booth and that was it,” she says, incredulously. “Muta is like one of my big, big heroes… I mean, he interviewed me on his show when I just released my first album … so this, to me, was like a spiritual experience.”

Mutabaruka, concurs. “I just went in dere and do mi ting,” he says matter-of-factly. “It was wonderful… I never did anything like this before; not in this kind of tone.” He also reveals he wrote a song for her up-coming album, but “she’s still working out the melody,” he adds.

The singer travels with at least half a dozens pens to ensure a writing implement is nearby to record every new note or melody that often visits her without warning. She thinks her pending, third album, which is poised for release in a “couple months” will have its own, distinct nuances. “It will have a totally different arrangement…some of the songs will have a jazz feel … like a re-do of Cassandra Wilson.”

Using precedence as her yardstick, she has no idea which song will get the most airplay.

“Ribbons, which to me, is one of my best, poetically and also very structured,” did not get the type of recognition that she thought it would.

The new album is not Manley’s only focus. She dedicates a wealth of her time bonding with her family, particularly her girls, one of whom is currently pursuing a Liberal Arts degree in the US. “She is way more gifted with words than I am,” she says proudly. “We have our ups and downs…at one point it was like them against me and Joe, but that changed…and thanks to technology, even though our first daughter is away, we are still close in a different way.”

Della lists Damian Marley, John Mayer, and Carly Simon among her musical inspirations, and thinks fresh artistes like Etana, Tarrus Riley, and Cherine Anderson are talented and contribute to the enrichment of Jamaica’s music industry.

The artiste goes nowhere without her tide pen, and says these days, “I take life as it comes…just one day at a time.”

Raquel is a writer and PR Specialist living in Toronto, raquel.ingram@abengnews.com