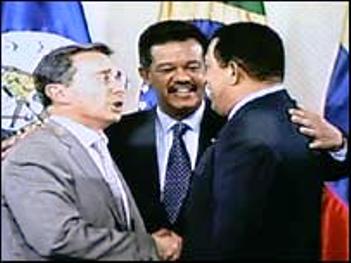 One for the TV cameras – Smile!

So it started with a bang and ended with a tush: Colombian soldiers in hot pursuit, take out Farc rebels across the border in Ecuador and Venezuela’s Hugo Chavez threats war, come hell or high-water against Colombia and its evil empire ally, the USA.

But Chavez’s grin and grip on Dominican television with Ecuadorean President Rafael Correa and his Colombian counterpart Alvaro Uribe, is reported to have not just settled the dispute but heralded a new Latin American unity.

Of course the world is left to wonder: What was all the chest beating about? Latin machismo or a clever ploy to boost the already artificially high price of oil into the stratosphere by adding to the pervading global tumult that drives the Wall Street binge?

“This summit was a gift from God,” Reuters quoted Chavez as saying Friday after the grin and grip at the Rio group summit in the Dominican Republic.

News reports now say that four Mexicans may have been killed in the raid and Mexico has ordered an investigation into the operation.

The Organization of American States (OAS), of which all hemispheric states except Cuba are members, on Wednesday unanimously approved a resolution saying that Colombia had violated the “principles of international law” by crossing into Ecuador, but stopped short of an outright condemnation.

The 34 OAS members agreed to set up a commission of inquiry led by the organization’s head Jose Miguel Insulza, to investigate the incursion and scheduled a meeting of OAS foreign ministers for 17 March.

Colombia has waged a four-decade conflict with left-wing rebels who finance themselves through the cocaine trade and by kidnapping hostages for ransom or political gain.

The Colombian president Alvaro Uribe said he had not warned Ecuador before the raid because President Rafael Correa had not co-operated in the fight against terrorism. He also claimed material seized in the operation proved links between Mr Correa’s government and the rebels.

While Correa rejected the claims, saying his hands were not “stained with blood”, he admitted there had been communications with Farc, but only because his government was trying to secure the release of hostages held by the rebels, including former Colombian presidential candidate Ingrid Betancourt.

But before shaking hands, to applause from the summit delegates, Mr Correa said: “With the commitment of never attacking a brother country again and by asking forgiveness, we can consider this very serious incident resolved.”

Does all this hold any special meaning for the Anglophone Caribbean? If only because Chavez’s Petro Caribe concessionary oil agreement has driven a wedge between Caribbean Community partners and Trinidad and Tobago, there must be concern at the power alignments, which seemed to pattern not merely ideological alignments with left wing leaders siding with Chavez, but there also appeared to be an appeal to an ethnic Latino bonding of “brothers”.

For Guyana, which has lived under the shadow of a Venezuelan border claim since late 19th century colonial times and Belize, which is haunted by similar claims by Guatemala, war drums on ethno cultural lines should not be any reason for cheer.

And with CARICOM playing a lead role in establishment of the wider-region economic bloc, the Association of Caribbean States with Latin partners, headquartered in Port of Spain, the Trinidad capital, expanding negotiations into an arena of fractiousness while its own integrative process lags, will not be a cake walk.

But maybe like Chavez we should all be confident: “We are all happy,” Chavez said after the handshakes. “Peace! We must unite and integrate.”

Castro’s Anglo-Caribbean Ties a Mix of “Good and Evil”