The Japanese are famous for many things; cars, computers and even bio technology. And yet how a society that has so much red tape became so efficient is almost a mystery.

Picture it, Sicily 1923 ……. Oops sorry wrong country, definitely wrong time line. Picture it, Honshu 2007 you walk into a McDonalds, you order a Big Mac. You say to the young lady at the counter, “Can I get this without mayonnaise? Instead I would like the sauce you use on the hamburger.” She smiles uncertainly back at you. Mentally you check your Japanese and you’re sure you said it right.

You repeat your request; she smiles again uncertainly and calls over her shift leader. He smiles at you and again mentally you check your Japanese, “No, no,” you say to yourself, “you got it right the last two times.” So you order again, the shift leader smiles and nods sagaciously, he signals to the rest of the restaurant staff that they need to have a quick meeting. They gather together and discuss this, their latest crisis, in a quick group huddle.

The meeting lasts for half a minute and eventually the manager emerges alone. The rest of the staff waits fitfully in the back avoiding the glaring eyes of this fire breathing “Gaijin” with the outlandish request.

The manager saunters over carefully, checking to ensure that if I were to leap over the counter he would be able to flee for one of the nearest exits. Grimly and with some trepidation, he explains, that although I can have as many as two packets of ketchup to place on my hamburger, he cannot authorize one of his team members to press the ketchup dispenser over my Big Mac.

“So I can have two packets of ketchup, which will undoubtedly cost more both to your organization and to an already over burdened waste disposal system, but for your team member to pull the lever once while handling the burger is out of the question?” I ask. He smiles benignly, the silly foreigner gets it. “Ok,” I sigh, “One Big Mac and two packets of ketchup.”

Ok. Picture it, Honshu 2008, you enter an Italian restaurant. You order food whose only relation to Italy was the fact that the waitress was wearing a pair of shoes that said “Made in Italy” (no doubt assembled in China). You ask for a bread roll. The waitress shakes her head and politely informs you that they do not offer bread rolls. You open the menu and point to the picture of a bread roll. “That,” she says compassionately “is with one of the other set meals. Yours comes without bread.”

You say, “I know that, but I’ll pay for the roll.” Again she smiles and says, “I will check with the chef.” She returns a minute later, no bread in hand, you can guess the rest. The chef is unable to comprehend why anyone would want bread with a set meal, where clearly no bread was included in the first place. What the hell kind of people is he getting in his restaurant anyway? You sigh and look on longingly at the crusts of the mayonnaise and tuna pizza your friends just ate. “Pizza crust is a kind of bread isn’t it?”

Sheepishly you swallow your pride and ask if you can devour the ends, the girl is cute anyway so you don’t feel too bad asking. She nods agreement, undoubtedly as much to ensure that you do not get any of the long trail of drool you have dangling from your chin, onto her pizza. Your bread lust sated you recline and over a tankard of beer you try to work out how this country became a world power for perhaps the thousandth time.

On the impact being a foreigner has on the very young 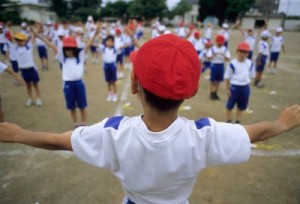 Honshu 2007. You’re coming home from work and run into a group of children coming back from elementary school. Nothing can prepare you for how mind blowing cute the little things are. Picture if you will a group of these tiny little things all with matching caps and knapsacks, trudging along, one behind the other; the tallest at the helm and aft; the smallest in the middle. You say, “hello” and the entire entourage of little ducklings grinds to a halt. They stare in wide-eyed amazement; “The strange round eyed creature spoke.”

One brave little boy, who clearly has had at least one English lesson, ventures a “Hello”, I reply with another “Hello”. The group breaks into titers. They reform into a group huddle and eventually the brave little boy emerges. He ventures forward slyly and when no more than half a meter from me, races forward, pokes me with a finger and runs back to the loud applause of his friends.

Buoyed up by the praises of his friends, the little boy returns yet again, this time with more assurance in his step. He reaches out and instead of a quick jab, he rests his hand on mine. Stunned silence, his friends are amazed. He eventually saunters back over to them, a hero. Seeing that the first little boy wasn’t eaten, a brave little girl also sallies forth and pokes me with a finger.

Before long I am surrounded by a throng of tiny figures all shouting “Hello” fingers at the ready, waiting for their turn to poke the foreigner. I bear this with good grace before I begin kicking them solidly in the hind parts (that part was a joke).

Rico is off travelling around Japan